Spray stings our eyes.
Crouched by the sea wall
we watch the waves break,
creamy, hissing, as they
rake back pebbles with a sound
like thousands clapping.

Later, fought to a finish,
the undertow retreats,
the sea smooths out its folds,
finds equilbrium
like wine poured in a glass.

The beach is blank
scraped clean
blanching at each step.
Later it will be a palimpsest of stories –
a dog’s paws printed shallower
and wider as it runs;
a sandcastle, untenanted
and fallen into disrepair –
and gulls’ webs pressed like leaves
into the sand. 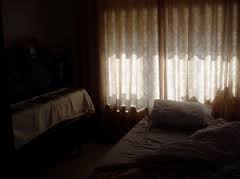 I wanted to set myself very specific brief for the poem below.It was going to be about an old man remembering his first love affair. I wanted it to be technically tight, as far as rhyme and rhythm are concerned. But I didn’t want it to sound stilted. And I wanted to use as few words as possible to tell the story- the silences had to contribute to the finished article.

Well. Here it is

Street light slanted through the half pulled curtain.
She took my hand and put it to her breast.
“It’s you I want.” She smiled. “ As for the rest…”

That she should want me then…to be so certain..

Yes. I have memories which sting me yet
even as they console- the way she purred
against my neck when we were done…. No word

Well…what do you think ? How far did I succeed ? How long did it take to write?
Ten days.About twenty odd hours.

Writing ” Old love” brought all sorts of practical writing questions to mind, and I thought they might be of some interest to other people. Let me know how relevant they are to your writing style.

Do you have a clear idea about what you’re going to write about before you start ?
Or do you just take a pen for a walk ?

Do you have the first line in your head before you begin ? Or any other line ?

Can see a planned journey from beginning to end ? Or do you allow yourself to wander down golden pathways ?

Do you use a pen and paper or a computer ? What are the advantages and disadvantages of each mode of writing. Anyone dictate a poem ?

5. Do you usually finish a poem in one session, or do you write it over a period of time ?

6. How much do you revise your poem ? Do you just give it a tweak and move on to the next ? Or do you go over it line by line, word by word, silence by silence ? And if you do, how long does it take you ? Hours ? Days ? Weeks ?

7.Who do you write for ? Yourself ? Another specific person ? An audience in general ?

8. Raymond Carver said that every poem needs an audience. It’s like a kiss. You can’t do it on your own. Was he right ?

9.Which is more important- structure ? Or subject ? If you choose quite a strict format in terms of rhyme and rhythm, does this make writing the poem harder ? Or easier ?

10.Who are your poetic role models ? Do you consciously attempt to imitate them ?

I got rhythm.
So has everybody. It’s built into us. We’re tuned to the rhythm of light and dark, the beating of our hearts, the in-and-out of our breathing.So it’s no surprise that rhythm is a crucial tool in the poet’s toolbox. I use that simile quite deliberately, because writing a poem is making something just as much as someone making a chair, or a carving, or a painting. In fact the early Scots poets were called “ Makars” for that very reason.

OK – what does this miracle tool do, then ? It gives shape to the poem. By and large prose is a continual stream of thought, structured into sentences and paragraphs. But poetry needs rhythm to mark out a territory, indicate a change of mood.

There are plenty of other tools of course- rhyme ( obviously) imagery ( metaphor and simile) and all those tricksy little things you can do with the sound of words -onomatopoea, for instance. ( I only put that in to show you that I know how to spell it.) But we’re not going to deal with all that stuff in this post. Maybe later.

Hang on a minute. Look at that again.

Do you get it ? A line of ten syllables with five of them stressed.

The posh name for this is iambic pentameter (“pent” as in five- yes ?)

French poetry tends to add a couple of syllables and an extra beat. Actually some people say that we have the five stresses line because that’s about the length of a single breath. Maybe the French breathe more deeply. But I digress.

We use iambic pentameter all the time. Every day.

I’m going to the shops to buy some bread.
My bike has broken and I need some help.
My sister’s got the measles ! Fetch the nurse!
Now is the winter of our discontent
Made glorious summer by this sun of York.

Haha ! you weren’t expecting Shakespeare in there, were you ?

In fact Shakespeare is the King of the iambic pentameter. He writes prose- sure- but always for a reason. And his iambics don’t plod a long like a trotting horse. He riffs on the idea of the five stress line; he plays around with the pause (caesura) in the middle. And his audience loved it. They didn’t think his plays were written in a posh inaccessible way- they recognised that he wrote in their ( and our) daily speech. And the five stress line was a real help to the actor too- easy to learn, flexible- you could play around with pauses, and yet come back to the beat at the end of a line.

And yet…and yet…there’s no law saying you’ve got to write in iambic pentameter. You can play around with rhythm. Try changing the rhythm when you change the mood. Try a four stress line ( I find it clumpy, but give it a go)- or challenge the French at their own game and roll out might alexandrines.

That’s about it for now- on rhythm. But I’m going to stick one of my poems at the bottom here. The rhythm is largely three stresses- but it isn’t regular. But there are other things going on which we will discuss some other time.

Sky so cold it could
crack like an eggshell,
clatter to the ground
in shards.

Earth so hard it hurts,
ridged and rutted,
treacherous, bruising.

Air so sharp,so full
of pins,it stings the throat,
turns to steam
before your face.

Only the heart ,so old and full of winters,