I always end up writing about the lake – I don’t know why. It’s only a minute from my front door – so perhaps it’s the easy access which makes me choose that dog-walking route rather than any other. And I always have something to write about.

The lake is constantly changing – for the last ten days it has had a crust of ice on it – sometimes three or four inches thick, sometimes transparent as cellophane

This is a diary poem – a marker for something I saw, which I don’t want to forget.

Light leaks into the air;
clouds take their substance
from the the morning twilight.

The grass is blanched with frost,
puddles splintered glass
and the lake alive
with shifting rafts of ice

where a swan struggles

snake neck stretched,
webs strive for grip
as white wings thrash the water,
till it lifts, makes the air
sing with every wingbeat.

It hits you as soon as you turn the corner onto the lakeside- a slap in the face, a roaring, howling, never ending exhalation which takes away your breath, presses against your eyeballs. But that’s just the bassline. The wind shrieks and screams round the houses,upturning dustbins and flinging litter against the windows. It rips through the trees like a steel comb; twigs tumble onto the path around you, and the taller trees thrash to and fro. Half way round a tree has fallen- the thickness of a man’s torso and thirty or forty feet high. The root ball has been right ripped out of the earth; one of the lower branches has been torn off, leaving a garish orange scar.

The lake looks as though it is boiling. Waves collide and splinter as the wind direction changes. It has overflowed on the far side. Trees which were twenty yards from the water yesterday are surrounded by it now. There are few birds on the lake. Half a dozen greylag geese shelter in a little inlet by the sluice gate; a single gull pushes hopelessly into the wind and then ( like the Ted Hughes poem) “ bends slowly, like an iron bar.”

We have the lake to ourselves, the dog and I, and he is not happy. This is not what the world should be like. He looks pleadingly at me.
“ Do you want to go home ?”
He turns round and dashes off, tugging on the lead.

A crude sketch
of trees against an empty sky.

Crusted with dirty snow,
the bank offers only
curls of frozen mud,
slick paths to turn an ankle.

On the flat river,
one solitary gull performs
his circus trick, seeming
to walk on water, steady
on the unseen floe
beneath his feet.

It’s that dead time of the year. There’s a thin skim of ice on the lake, thin enough to be almost invisible, so the gulls standing on it look as though they’re walking on water. The trees are stripped down; the grass is is covered with a frost so thick, it almost looks like snow. There’s a cold wind coming down from the north end of the lake, so I pull my coat collar up round my ears.

There’s no-one here. That’s the wierd thing. Usually I meet half a dozen people ( and dogs) on my way round. But today there’s no-one. No bikes either, which makes a pleasant change. Usually they zip past your elbow without giving you any warning or thanks. No geese. Not a Canada or a greylag in sight. They’re down in town, by the river. It’s three degrees warmer in the city, and there are plenty of visitors to give them handouts. If the pickings are slim, they wait outside the supermarket and blag stuff from customers.

Everyone goes to the lake in the summer – the little kids on a nature walk from school,the Ladies Dog Walking Club, cyclists, lovers, fishermen- it even makes a good rendezvous for the local crims when it gets dark.

But today there’s no-one. The lake is resting under a thin sheet of ice, all the maquillage of flowers and buds stripped off. It’s the low point of the year.

That’s fine. We rest. We gather our strength, and start to think of the year ahead. 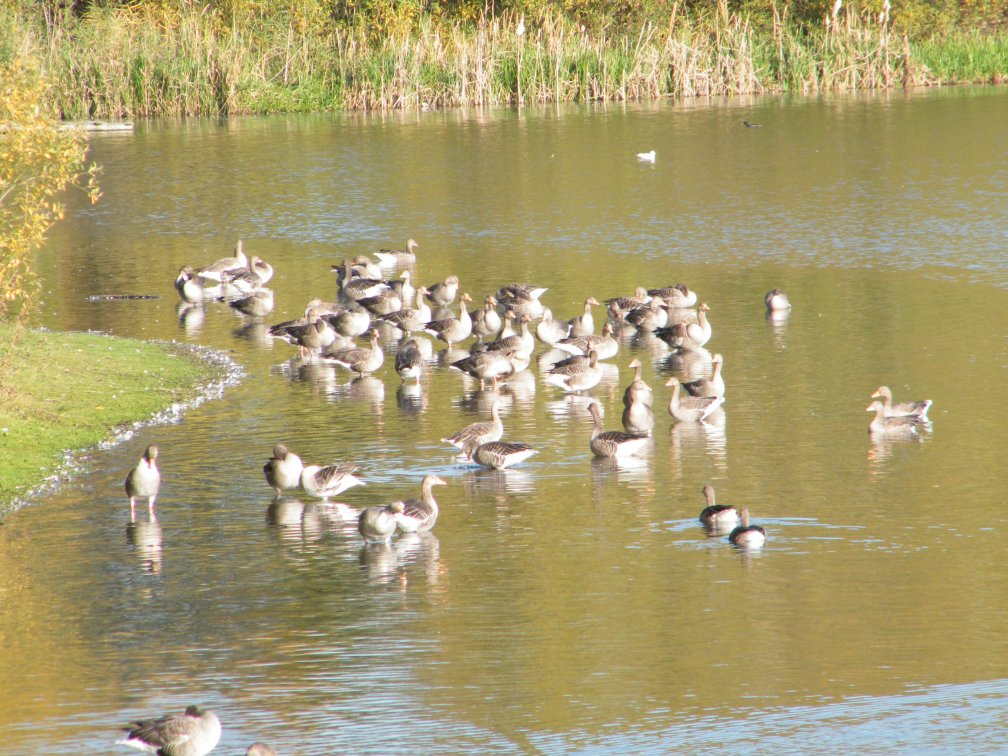 The geese are back ! I couldn’t believe it. Look at the way their numbers shot up, and then declined:

Of course, it’s all to do with the weather. We had a week of very late summer – warm days, no wind and no rain. That brought the geese up from town. I’ve never see the lake so crowded.

Our geese are not migratory- unless you call a journey of three miles migratory. They are a local population who spend their summers at the lake, feeding off the surrounding fields, and the winters on the banks of the river which runs through the middle of the city. There they have a river, and the warmth of surrounding buildings as well. Food is readily accessible- all they have to do is go round the back of the local supermarket and take what they want. They are first rate scavengers.

It’s strange, but they have no fear of people. They step out into the road and the traffic stops for them (often for minutes at a time) until they get safely to the other side. They go into shops, they blag food from passersby. You don’t believe me ? Look here.

Arrgh ! No ! Not Shakespeare thingy  ! He’s old fashioned and boring and you can’t understand him and he’s like…just dull !

Silence oik ! And listen to this:

What do you think ?  Lovely reading but isn’t the poem a bit olde worlde ? A bit twee ?

Line 1 OK- I concede- an average opening line for a winter poem. We’ve all seen icicles

Line 2. Dick the shepherd tells us this a rural poem. Why is he blowing on his nail ? Because he hasn’t got any gloves ! Because he’s poor and cold and his finger ends hurt like hell.

Line 3. We get the first hints of a household here. There’s Dick the shepherd and Tom the servant- and Tom is carrying logs in because they’re going to be needed on the fire.

Line 4. It’s so cold the milk is solid. We’re starting to get a Breughel winter scene here.

Line 5. Key words are “nipped” -you feel as though the blood is freezing in your veins. And “foul” – the roads are impassable

Line 6. The owl. Not the most cheerful of birds- then why “ merry” ? Are we getting the feeling that The Boss is being a bit ironic here?

I won’t do a full line-by-line run through of the next verse. I’d only point out (a) the breathless use of “ and” throughout the poem. He can’t wait to tell the story of our house. (b) there’s a cast of characters here- the parson who can’t be heard because of the coughing, Marian, and greasy Joan- who’s probably the kitchen maid. And  why is she keeling (scraping) the pot ? Because she’s hungry and she’s scraping out the last bit of meat or dried on gravy, that’s why.

So the “merry note” of the owl isn’t so merry after all.

Far from being a jolly, rilly-me-dilly-me-and-a raspberry -o song, this is a harsh portrayal of a household on the breadline, in the middle of a filthy, cold winter.

Difficult ? Not really. Bland ? Certainly not.Powerful ? I think so.